A progress update on my project to do MIPI camera control and video reception from scratch with an FPGA.

The FPGA board I’m using has a bunch of peripherals and I’ve been writing SystemVerilog code to support them one by one. I posted about my HDMI work before, which has since reached maturity. The next step was naturally video input. It’s been a long journey and there’s still more to be done!

Before even working with any camera-specific logic, I needed an I2C bus master. It is used to control the camera configuration (i.e. begin streaming, change gain/exposure, change FPS, etc.). The hardest part was getting the timing right. It is simple in principal, but because you could interface many different I/O technologies with an arbitrary arrangement of wire, capacitance and resistance play a big part. Once I got I2C working, it was time to work on interfacing with the camera.

If you’ve ever worked with a Raspberry Pi, you’ve probably heard of the Raspberry Pi Camera Module. There are two versions of the module made by the Raspberry Pi Foundation. Version 1.x has an OmniVision OV5647 sensor and version 2.x has a Sony IMX219 sensor. 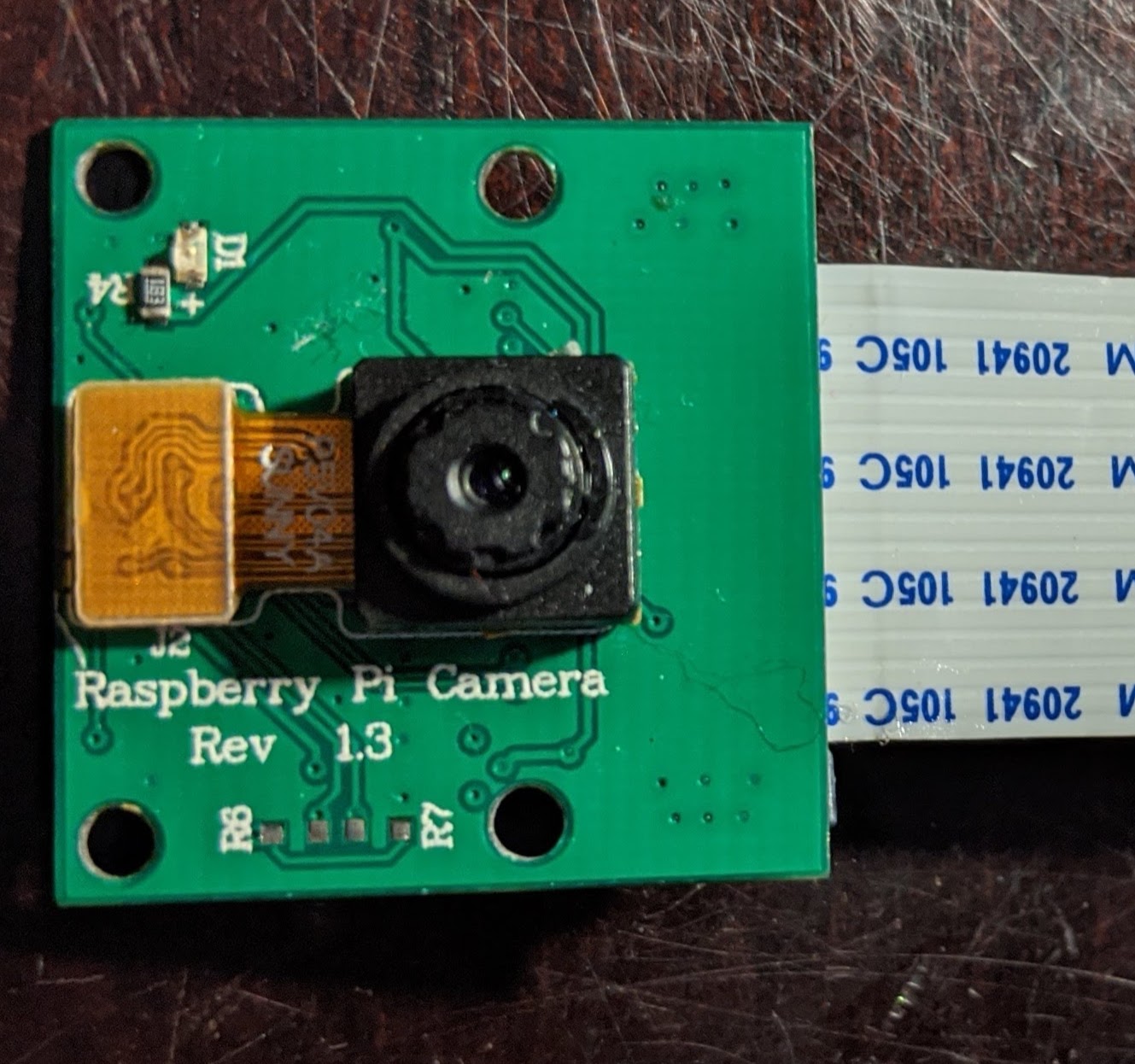 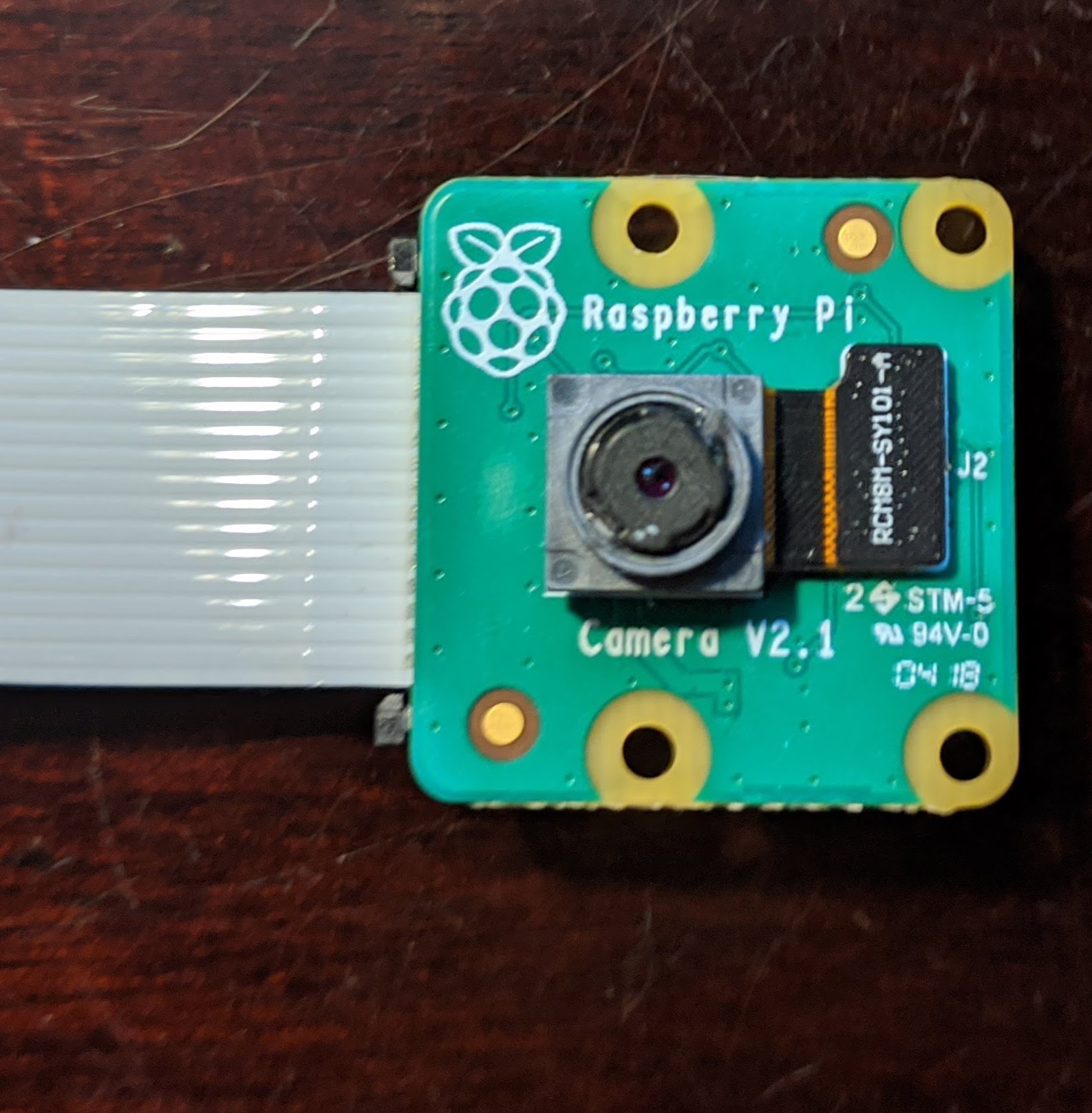 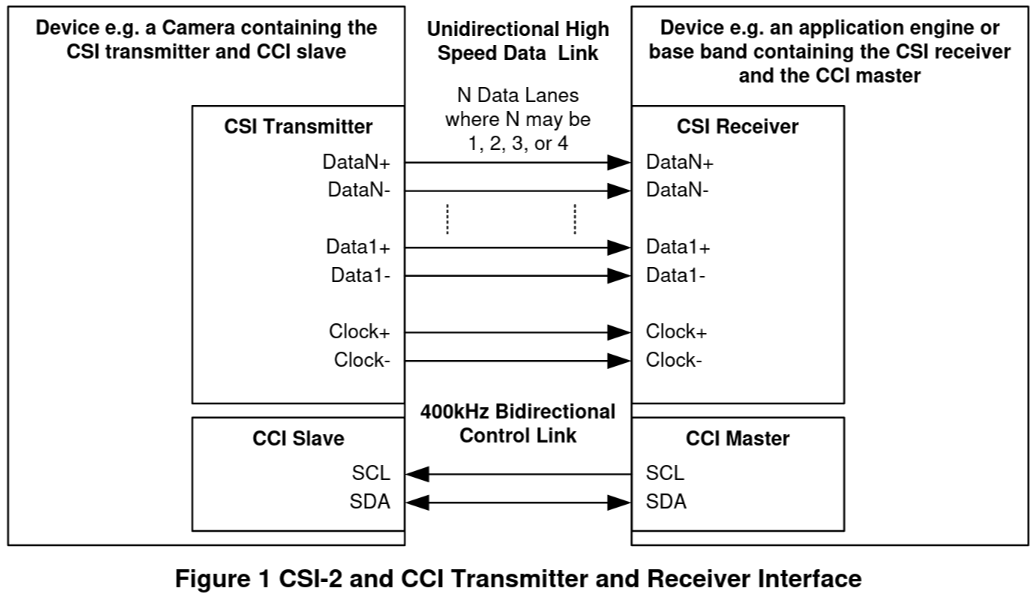 CSI uses low voltage differential signaling (LVDS) to transmit packets of data from the camera module to the receiver. There are a total of up to 5 LVDS pairs. The first is the clock. The clock frequency is configured via MIPI CCS. The four remaining pairs, referred to as lanes, transmit the data itself. More lanes means a higher possible framerate and larger resolutions since bandwidth can be doubled, tripled or even quadrupled. There are two types of packets: short and long. Long packets contain image data as a line of pixels in the image, or some other embedded data. Short packets usually contain control information (i.e. start/end of line, start/end of frame, etc.).

Technically, CSI is implemented on top of MIPI D-PHY, which defines the low-level physical and electrical characteristics of the interface. There should be a secondary low-power function on each lane including the clock that detects when a packet will begin and end: 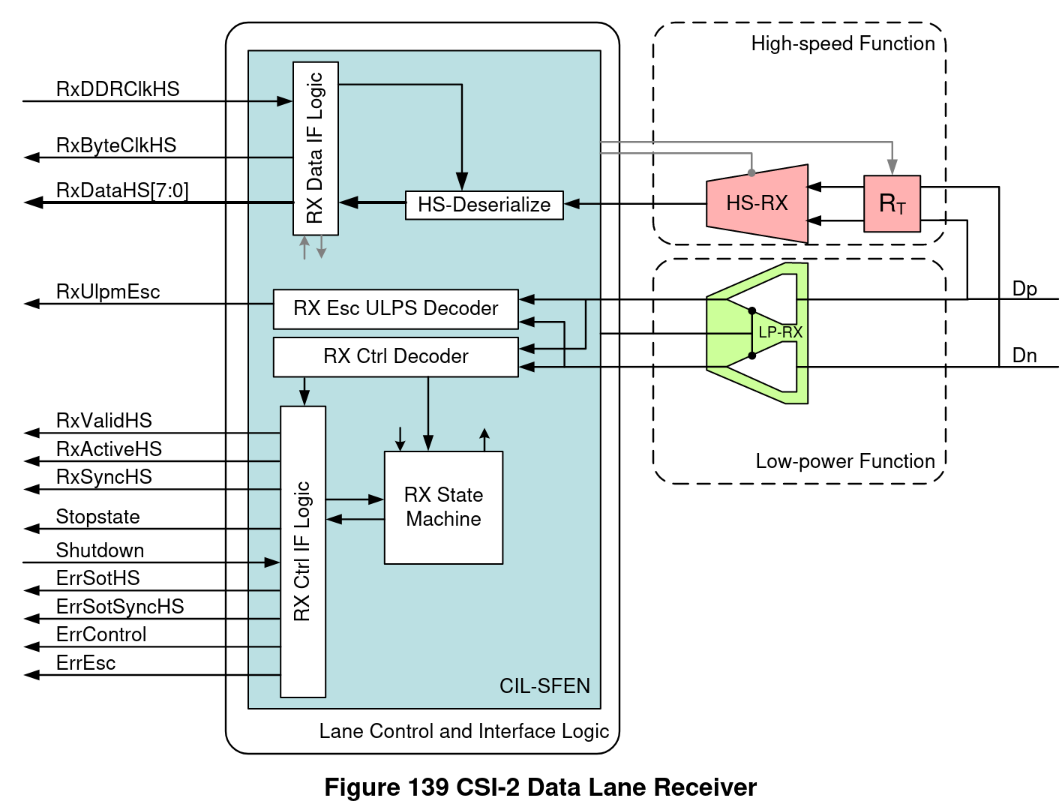 However, because the board I’m using only has the high-speed function, the SystemVerilog implementation must constantly listen for the 8-bit synchronization sequence present at the beginning of a packet. The implementation is available on GitHub.

After reading the datasheet for IMX219, I implemented a driver with a few resolution modes. Here’s the rough state machine diagram:

I’ve also implemented a driver for OV5647 that does just 640x480 for now, using the same interface and state machine concept. My hope is that eventually there will be a collection of drivers that enables plug and play usage of arbitrary MIPI camera modules. It would just be a matter of detecting the model and applying the right configuration over I2C.

The implementation is available on GitHub.

Now that all the components were there, I thought it would be pretty straightforward to display the camera feed over HDMI. That was definitely wrong, and it’s been about a month since then.

To get the data from the MIPI CSI clock domain to the HDMI clock domain, you can’t just clock a set of flip-flops with one clock and read them with the other. There’s metastability to worry about! Consider the analogy of a ball at the top of a hill: 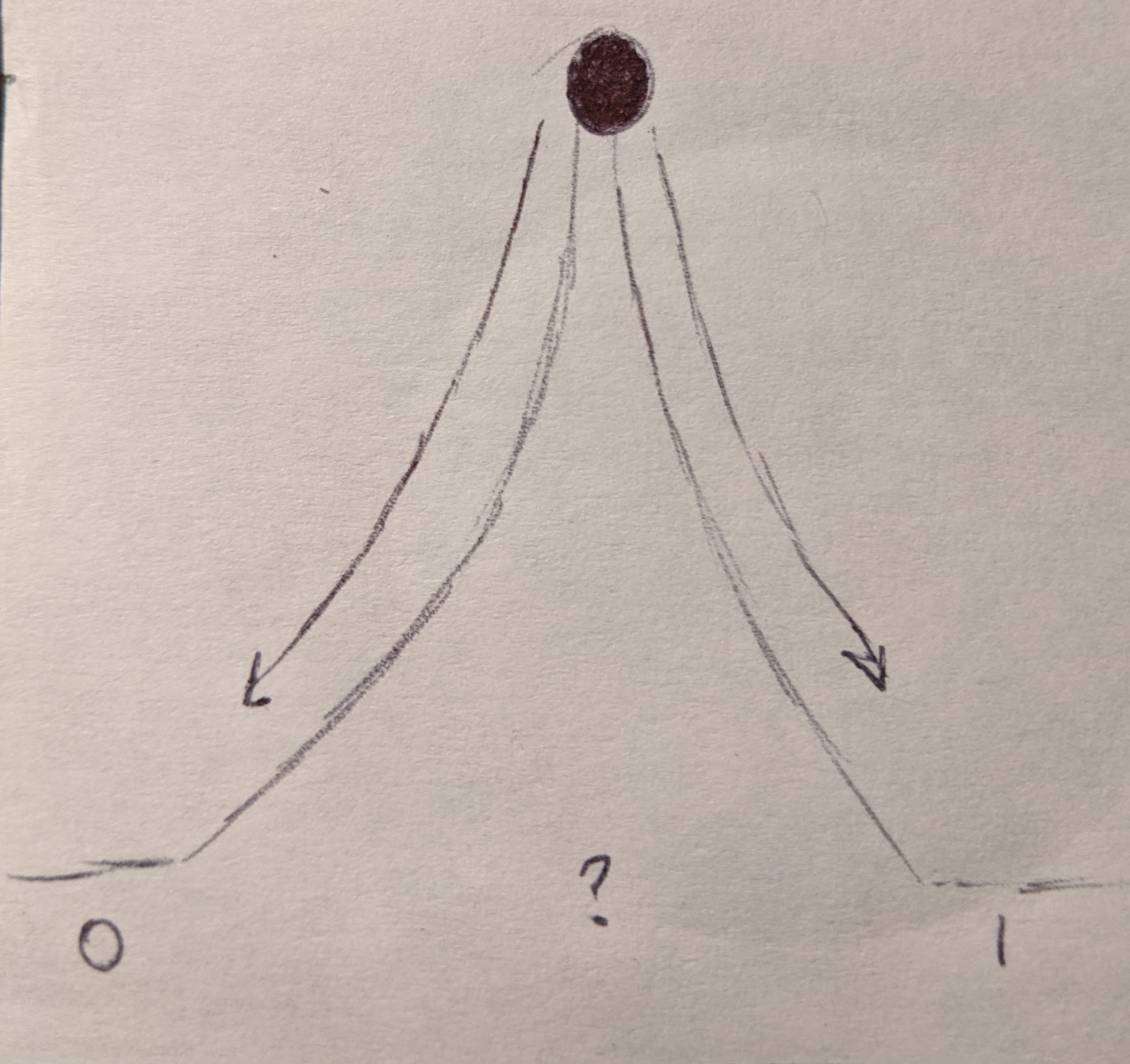 The ball could fall to either side of the hill, and there’s no way to know. That’s metastability in a nutshell; it means the value you read could be either 0 or 1, depending on where it settles. It usually occurs in clock domain crossing when the two clocks don’t have a synchronous relationship and setup/hold violations occur. I’ve used several techniques for resolving metastability: 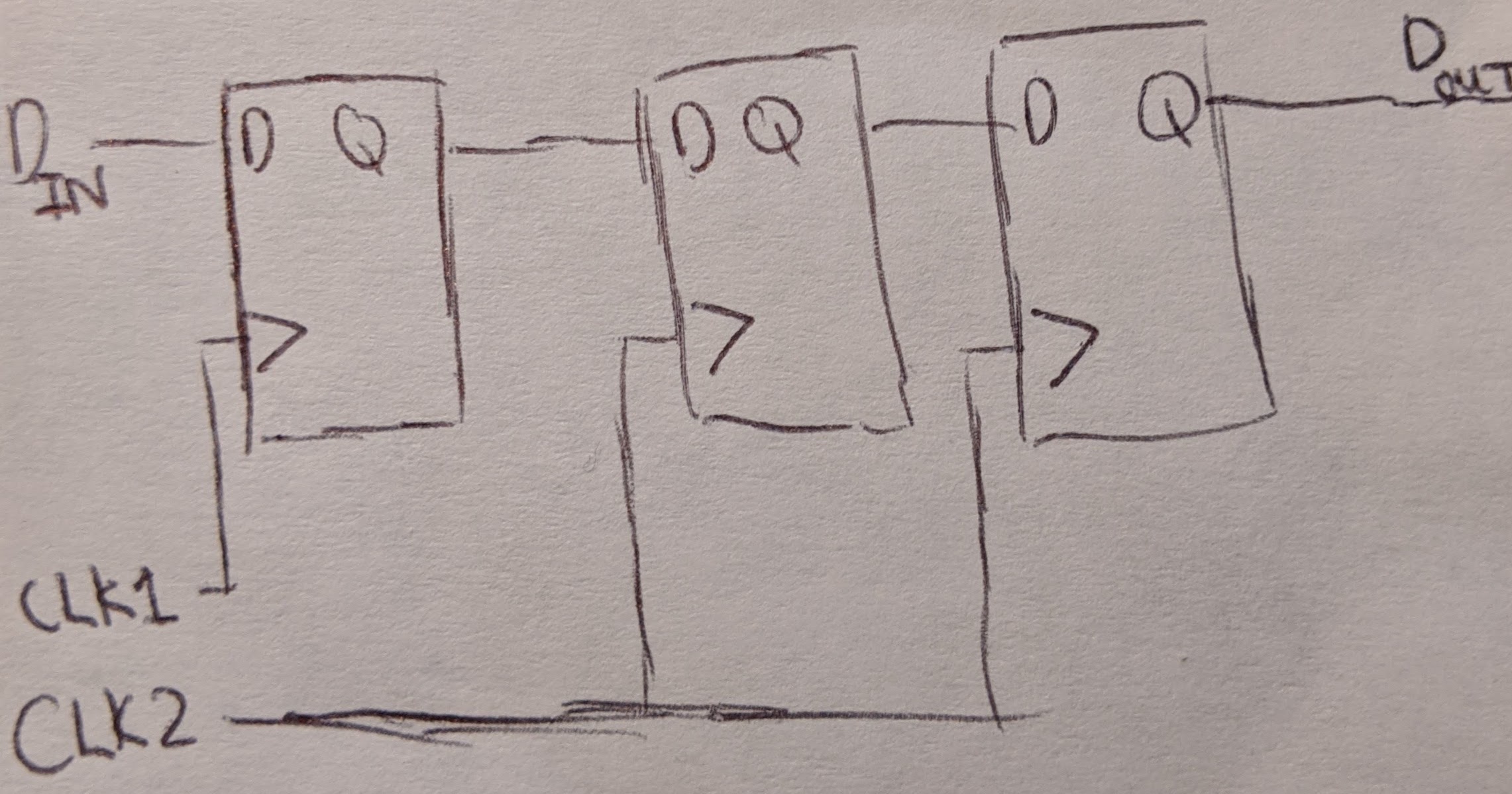 To send a multi-bit value along with the control signal, you can add a mux to the sync chain concept:

The mux will swap its data bus from the flip-flop feedback path to the bus from the other clock domain once the control signal is received. At that point, the data should have settled and is no longer metastable.

Sending large amounts of data at a high speed requires a dual clock fifo backed by dual clock RAM with gray code address pointers. Intel has one, but it’s not too much work to write one. Debugging metastability can be hard though, since failures appear infrequently and are difficult to reproduce.

After dealing with clock domain crossing for a few weeks, I had little luck. The pixels on the screen were a jittering mess. Shining a light over the camera didn’t change this, which told me none of the image data was actually reaching my display. That’s when it hit me – a FIFO on the FPGA could never be large enough to directly transmit video over HDMI.

I implemented an SDRAM controller and posted about it on the Arduino MKR Vidor 4000 forum and it has since garnered some attention.

The TL;DR of DRAM is it’s a grid of really small capacitors that either store no charge (0) or full charge (1). The capacitors discharge over time and have to be refreshed periodically. The wires themselves have capacitance, so they must be precharged to avoid stealing charge from the capacitors during a read/write. 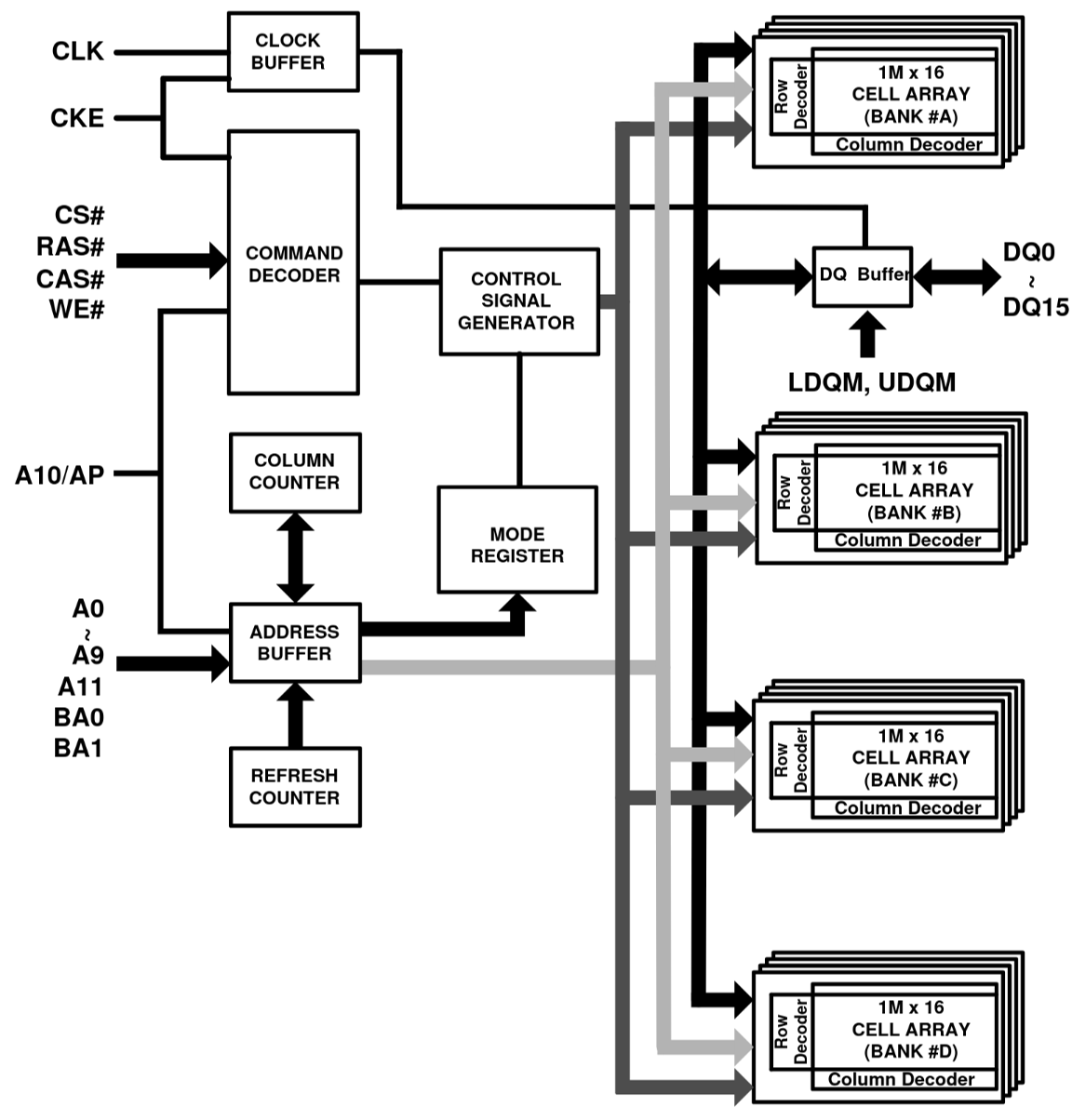 I’ve successfully stored data in the DRAM and read it back for displaying over HDMI. However, I haven’t been able to store the captured video in the SDRAM yet. I tried but the unintelligible pixel jittering is still present. It’s likely that I missed a minor detail that, once fixed, will make it magically work.

It may yet be a month more before things are working. Stay tuned!

Edit: RAW8 image transfer with an OV5647 works. Check it out in the demo repository on GitHub: hdl-util/mipi-demo